by Jan-Benedict Steenkamp, author of “Time to Lead: Lessons for Today’s Leaders from Bold Decisions that Changed History“

Philosopher Isaiah Berlin expanded on Archilochus’ quote in his 1953 essay The Hedgehog and the Fox, which divided writers and thinkers into two categories. Hedgehogs view the world through the lens of a single defining idea and foxes draw on a wide variety of experiences and do not boil it down into a single idea.

The distinction is highly useful as a study of leadership, particularly when examined as part of four Aesopian possibilities that include eagles and ostriches.

Hedgehogs are people who relate everything to a single central vision, which serves as their universal organizing principle. This vision shapes how they think and feel, how they understand the world. Hedgehogs focus on end goals, have a long-term view, and a mindset of reshaping (organizational or environmental) constraints. They tend to brush aside criticism and command the attention of their audience. Hedgehogs offer simple solutions to layered problems, reducing complexities to a few general rules. They offer a clear path forward.

Foxes know much better how to get somewhere than where they are going. They pursue many things, sometimes even contradictory, without a clearly defined overarching goal. As leaders, they are operational rather than strategic. They are prudent, cautious, detail-oriented, and see obstacles and complexities. They have a relatively short-term view and focus on process rather than outcome. Consequently they struggle with articulating a clear priority among the many ends they want to achieve, which may leave their followers in confusion over the marching orders.

Eagles are leaders who combine the qualities of the hedgehog and the fox. They can see far in the distance and possess great tactical agility. They are able to align unlimited ambitions with limited capabilities, dealing with immediate priorities while never losing sight of long-term goals. They may seek to increase their means before embarking on their journey. Or they may stretch their goals over time, striving for certain goals in the short term, saving others until later, and regarding some goals as unattainable.

Roman emperor Augustus, Abraham Lincoln, and Joseph Stalin are all examples of eagles.

Ostriches are essentially hapless leaders, not possessing the qualities of the hedgehog or the fox. They neither have a clear idea of where they are going or how to get there. They lack a compelling, overarching central vision. If they pursue goals at all, they are unrelated and often contradictory, and they fail to accurately assess the means at their disposal. You will find ostriches at most organizations, but they may be disproportionately present in large, bureaucratic organizations with high job security and an emphasis on “going with the flow.” 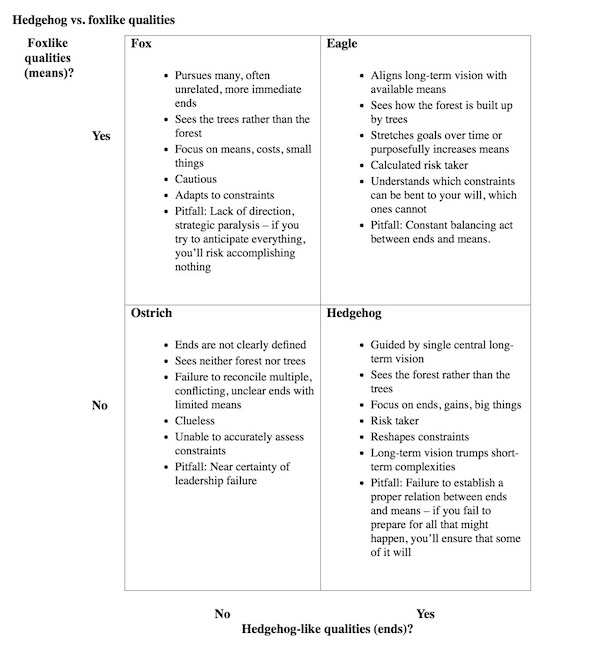 Aligning leaders with these Aesopian metaphors leads to interesting insights and helps identify areas of focus for growth and improvement. To determine which type of leader you are, complete the 20-question Hedgefox Scale. 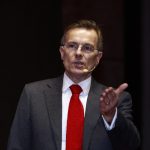 Jan-Benedict Steenkamp is the Knox Massey Distinguished Professor at Kenan-Flagler Business School, University of North Carolina at Chapel Hill. He is the author of “Time to Lead: Lessons for Today’s Leaders from Bold Decisions that Changed History“.

The post The Hedgehog, Fox, Eagle And The Ostrich: Studying Leadership Through Fables appeared first on Young Upstarts.

Schroders is aiming to raise £100m for a new Social Impact investment trust to be floated on the London Stock Exchange. The Schroder BSC Social Impact Trust aims to be the first London-listed investment company to deliver “measurable positive social impact as well as long term capital growth and income.” It will invest in a […]

Retirement solutions and platform provider Embark has launched an Investment Pathways tool to help non-advised customers move their pensions into income drawdown. The provider has also launched an educational website to provide information for investors about the choices they face as they approach retirement, highlighting some of the key considerations and providing useful tools to […]